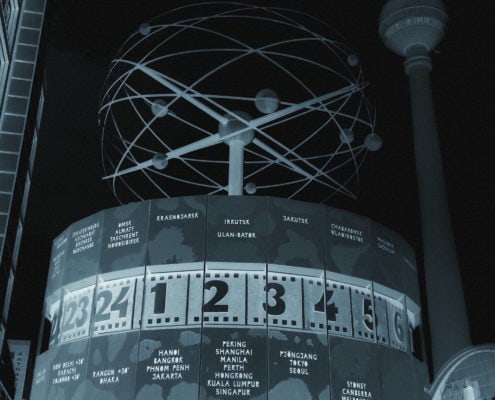 Berlin is the place to be. People ask how can a large capital city be so laid back and relaxed but at the same time offer so many opportunities? In recent times creative types have been flocking to the German capital for this disposition and many other good reasons. Sure, it’s become a fashionable shooting destination but that’s not all, there is also an exceptional local infrastructure to satisfy the at times rigorous needs of international film and television production.

Berlin production is booming. The list of Hollywood heavyweights shot here include The Hunger Games, Captain America Civil War, The Bourne series and The Grand Budapest Hotel just to name a few. We loved how a stylised 80’s cold war  Berlin was all over Charlize Theron’s 2017 action spy thriller, Atomic Blonde. 2018 will also see the release of the latest film in the Cities of Love anthology series titled, “Berlin, I love You” – the name says it all. It’s not just movies either, the multi-award winning TV show Homeland came here for season five and more recently Netflix series Berlin Station and sci fi thriller Counterpart were shot on location in Berlin. To top it off the most expensive German TV show ever produced, Babylon Berlin spent most of it’s €40 million budget in the capital.

First class German crews, equipment, and production services are available which have long been acknowledged as being up there with the world’s best. This is complimented by the legendary Studio Babelsberg with its vast array of stages, backlots, and studios (if you need to take things indoor for a bit of green screen action or suchlike).

It’s not all business, the art and craft are celebrated here every year when the red carpet rolls out for the Berlin International Film Festival or Berlinale, arguably the most important European film and media event after Canne.

And if you are worried about Language barriers in Berlin, don’t. English is heard all through the streets of Berlin and some locals even gripe that it’s becoming difficult to order in restaurants if you can’t speak English. When you come here to shoot it’s usually reccomended to learn a couple of phrases in the local language but be warned you may not get a chance to use them!